The Schottenstein Center opened with a sold-out concert by Neil Diamond on November 8, 1998, and has been the site of concerts by The Rolling Stones, The Bolshoi Ballet, The Three Tenors, Barbara Streisand and Garth Brooks. Home to Men's and Women's Basketball and Men's Ice Hockey, the venue has hosted the Frozen Four, Arena Football, a week-long Jeopardy taping, OHSAA wrestling and basketball Championships, Presidential visits AND high school and Ohio State University commencements.

Ground was broken for The Schottenstein Center on April 2, 1996. The venue opened its doors November 3, 1998, for a Men’s basketball game launching an opening month with just ONE dark day.

Private support from alumni and friends was crucial. Named after a $12.8 million lead gift, the Center pays tribute to Jerome Schottenstein, late Columbus businessman, philanthropist, and founder of Schottenstein Stores Corp. Additional partners include Huntington Banks, for which the venue’s Huntington Club is named; The Kroger Company and Nationwide Insurance, whose contribution went toward the venue’s extraordinary terrazzo floorscapes. With the exception of $15 million from the state legislature for an initial design study, the facility is completely self-supporting. No tax dollars, student fees or University general funds have ever been used.

Three Ohio State teams call "the Schott" home - Men's and Women's Basketball and Men's Ice Hockey. An expansion in 2013 added a second auxiliary gymnasium (the first is tucked into the SW part of the facility on the Lane Avenue side) on the northwest corner allowing the basketball teams to practice on the same day a concert or special event is loading into the arena bowl.

The self-contained visitor/star complex features a separate laundry, food service area, and media workrooms. Star Dressing Rooms ... furnished like suites in an upscale hotel are tailored furniture and decor-wise to fit each artist. Each contains a private shower and restroom. Catering and amenities (green m&m's only) are specifically outlined in the tour rider with the goal of making the artist and crew as comfortable as possible in their home away from home. Elton John dedicated one room strictly for a person to do ironing, the Stones used a pair of locker rooms to set up an arcade complete with pool table and video/pinball games and our largest dressing room is home to a special sink installed specifically to accommodate our first concert performer - Neil Diamond. And, sometimes there are zoo animals! 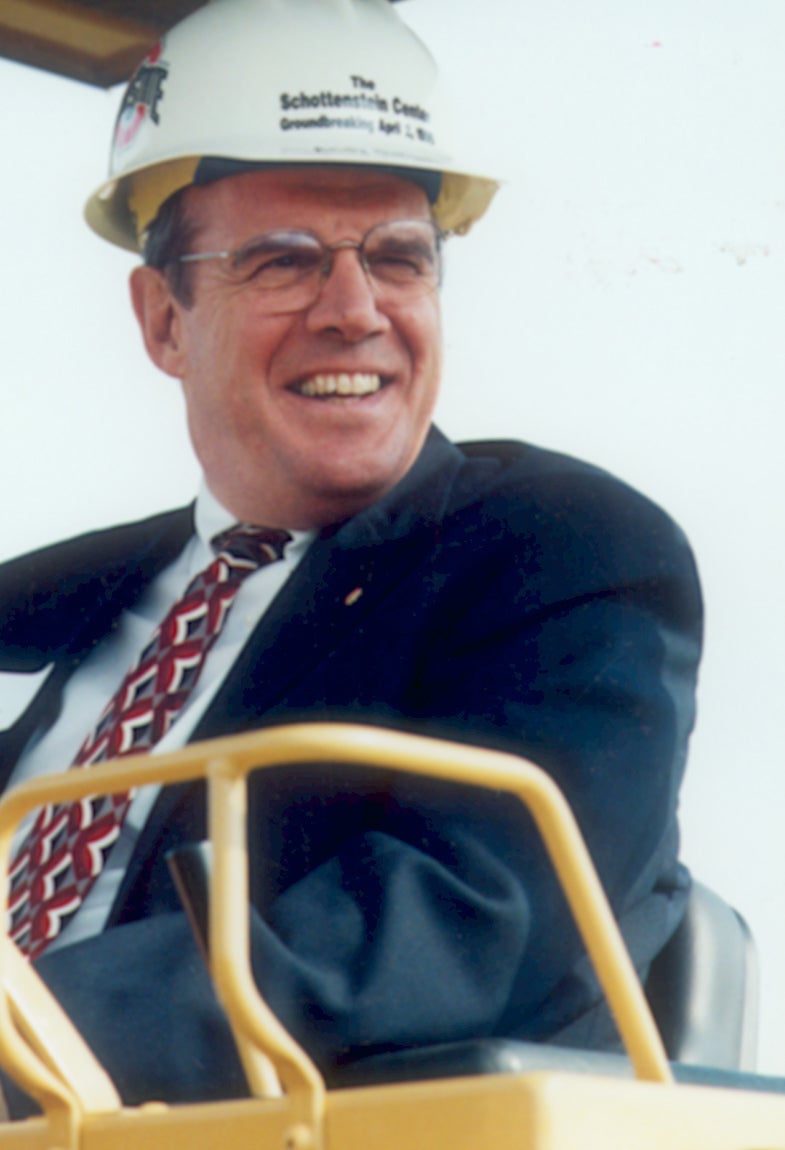 He assembled a premier coaching staff and spearheaded a drive to upgrade the Buckeyes' aging facilities including the Schottenstein Center featuring 3 concourses, 52 luxury suites, locker rooms and training spaces for the men's and women's basketball programs and men's ice hockey (who moved from an ice rink with a capacity of 1200 to an NHL-caliber facility) - becoming the biggest arena in the Big Ten conference.

Because of Geiger's vision, Ohio State student-athletes and fans enjoy some of the finest facilities in all of college athletics and allow Ohio State to host Big Ten, regional and national championship competitions to the university and the city of Columbus.

How Ice is Made?

The cement floor houses a cooling system, over 12 miles of pipes, which enables the operations crews to make and maintain an ice rink. The ice is built over three days by hand-spraying just a mist layer of water - it just freezes. The ice is then built to its final thickness of 1”.

For ice shows, extra layers of ice are built – then more white tempura is used to create a pure white floor. When the ice show is over, the Zamboni takes off the top layers of ice and the hockey rink is once again revealed. The ice sheet is covered with 4’x4’ polar floor (insulating) pieces for special events. Ice is usually left in for the entire hockey season – October through March – except for Monster Truck shows and Ohio High School Athletic Association Wrestling Championships.

For basketball games, the polar floor is placed over the ice covered by 4’x8’ hardwood pieces of the court that fit together like a giant puzzle. Removing the ice takes two days. The floor is heated up until the ice begins to melt and then Bobcats are driven out to chop up the ice. The ice is then pushed into large pits where hot water is used to complete the melting.

A unique feature of the Center is the terrazzo floor anchored by six floorscapes designed by artist Alexis Smith. 8,350 gallons of epoxy secures over 5 miles of 1/16” zinc wire strips painstakingly bent and placed by hand. The color was marked paint-by-number style. 115 tons of stones, mother of pearl and glass chips were prepared in custom shades.

The floor around the hockey player terrazzo contains more Mother-of-Pearl causing it to sparkle like ice. The floors were ground down three to five times to bring out the color. A diamond polish was added and the floors were sealed. Every single rotunda took approximately six weeks to complete.

The John Havelicek floorscape, located in the Southwest entry just outside the auxiliary gymnasium, features the only non-scarlet and gray (blue) terrazzo to represent the opponent’s jersey. The basketball in John Havlicek’s hand is over 13 feet in diameter. Havlicek, a starter from 1960-1962, accumulated a record of 78-6, played in three consecutive Final Fours, the 1960 National Championship team and was a 1962 All-American. After his career with The Ohio State University, he played for the Boston Celtics and eventually entered the NBA Hall of Fame.

The 1916 Women’s Basketball Club terrazzo floorscape, located in the Southeast rotunda, spotlights the uniform styles of the early 1900’s. Women’s basketball became a varsity sport in 1965. The Averill Roberts (1990-93) terrazzo pays tribute to a player that helped take the women’s team to 1993 Final Four.

The hockey terrazzo, located in the Northwest rotunda, is the only floorscape that faces outward. The player’s face is Benji Wolke (1998), the stick depicted belongs to Perry Pooley (1984 All-American and 1984 Academic All-American) and the body is a composite of players from the 1980-1982 teams. Men’s Ice Hockey became a varsity sport in 1963-1964; it advanced to the NCAA Frozen Four in 1998.

The inclusion of basketball and hockey in the Schottenstein Center terrazzo floorscapes seems logical, but why baseball? Baseball was the FIRST varsity sport at The Ohio State University – the image depicted in the Northeast rotunda of the 1890 baseball team actually features Buckeye basketball coach Fred Taylor, who played first base for the Buckeyes and became Ohio State’s first All-American baseball player in 1950.

Check Out These Great Videos 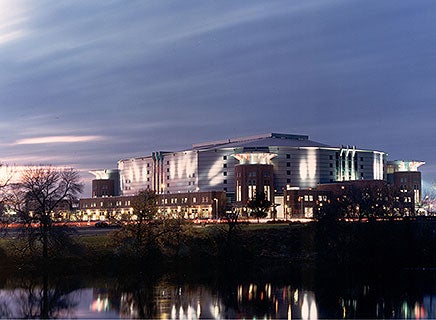 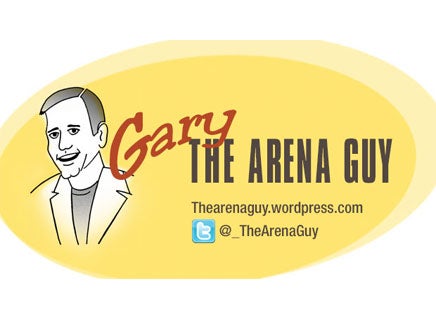 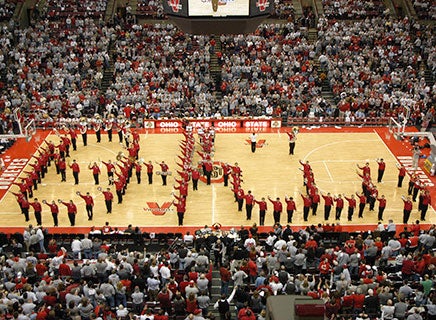 Script Ohio on the basketball court 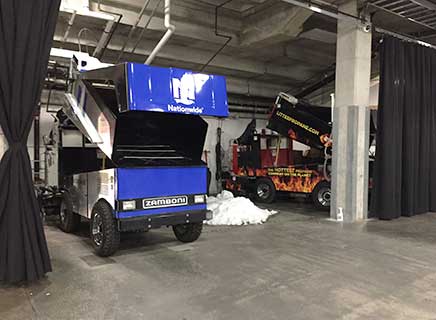 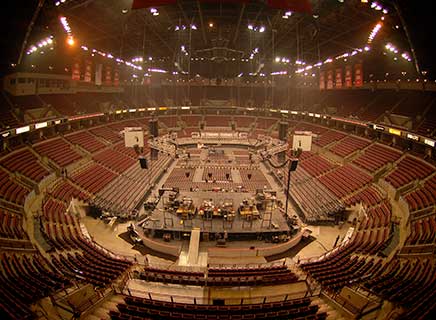 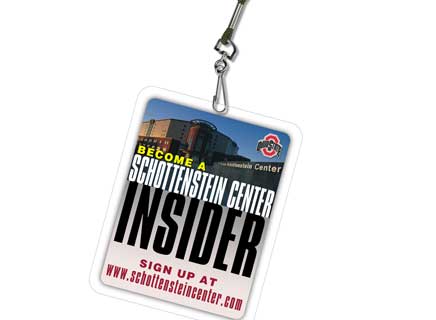